I’ve been very busy the past week, so this blog entry will be short on words (relatively speaking). Hopefully I can make that up with pictures! Here's one to start:

Last Saturday I went to a little get together organized by my friend Gaston’s high school friend. Why is his high school friend in Paris? Gaston is Argentine, but his dad’s French, so he went to a French lycée in Buenos Aires.
I met some interesting people: students studying “cultural management” (music, cinema, etc.), and students studying literature. However the most interesting experience went something like this:
·        Me: Salut! Je m’appelle Steven! Hello! My name is Steven!
·        Stranger: Bonsoir Steven, je m’appelle Romain.
·        Me: Enchanté Romain. Et qu’est que tu fais? Nice to meet you. What do you do, Romain?
·        Romain: Moi, je suis comédien. I am a comedien
·        Me: Ah, dit-moi une blague. Tell me a joke!
·        Romain: De quelles couleurs sont les petits pois ? What color were the peas ?
·        Me : Vert ? Green ?
·        Romain : No, les petits pois sont rouge ! <It’s a word play. It sounds like « les petits poissons rouges », which means little goldfish
·        Me, thinking : that’s not particularly funny joke. Is he really a comedian ?
After Romain’s friend remarked that the joke wasn’t very funny, I started having doubts about Romain being a comedian. At which point my multilingual Portuguese friend Alex came to the rescue, and made me realize that comedien in France means a person who does theatre.
Ha, what a joke that situation was! We then proceeded to talk about performing Shakespeare in French.

Sunday, my cultural exploration buddy Manuel (who went to the Louvre with me) and I went to St. Sulpice church, the second largest church in Paris (after Notre Dame).
<Video to be inserted soon!>
St. Sulpice is also home to one of the great “backdoor” tourist attractions in Paris. After attending Mass, Manuel and I climbed up the stairs and watch the organist, the famed Daniel Roth, play the organ.
Organ music sounds really beautiful from up in the console, especially when one realizes that the entire organ is mechanical (think, really complex typewriter), except the bellows of course…. When Monsieur Roth pressed a key on the console, I could hear a click sound, slightly lagged in time.

Everyone knows about the Louvre, but not everyone knows about the Musée d’Orsay. This museum has an impressive collection of impressionist art, among other things.
Converted from a railway station in 1970, it is much smaller than the Louvre. That has some benefits: namely, that I can at spend 4 hours and see half the museum (versus ....1% at the Louvre).
Some interesting things:
·        I found that self-guided audio tours are really good for extending my attention span in the museum! Especially for someone like me with very little art history knowledge. However, even with it, I reached my limit at 4 hours.
·       Fact: talk to strangers and you can become really good friends with them. I started chatting with a guy standing in front of us in line (I asked him about the Kindle he was reading), and we ended up touring the museum together. Fun fact: he works for John Deere in Madrid.

My first pizza in France

… was Neopolitan. Lots of anchovies:

This Friday (yesterday), all the international master’s and PEI students were invited to a little racluette. It’s like DIY cheese melting, as demonstrated by my friend Ali below:
I invited a French friend, Camille, whom I recently met. She wanted to meet more international students. We had a long discussion with my friend Prashanth, about learning languages. Prushan talked about trying to to speak French, Camille talked about her French English accent, and I tried to teach them to say 你好, with the proper tones.

Here’s the picture of the neighboring town, Lozère, where one takes the RER commuter rail into Paris. It’s very picturesque!
Even so, Paris is only a 30min train ride away! Imagine that for Needham/Boston! 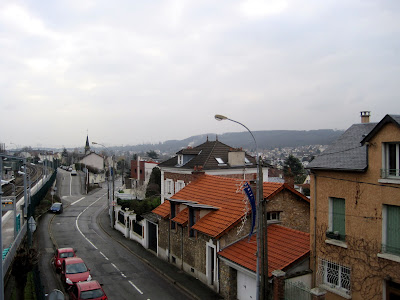 Jason, Rose, and Lexi (Olin ’12) are doing an awesome blog about their studies Singapore. Go check it out here. Jason has a quite an extensive list of strange vending machines such as this one here. I thought I’d try to introduce a little competition (I know France will lose to Singapore in terms of interesting vending machines). A swimming suit vending machine anyone? Tres efficace!
And finally, indoor rowing competition anyone? Complete with a pep band (top right corner), and scoreboard. I couldn't get a picture of the competition, but it was fairly intense! 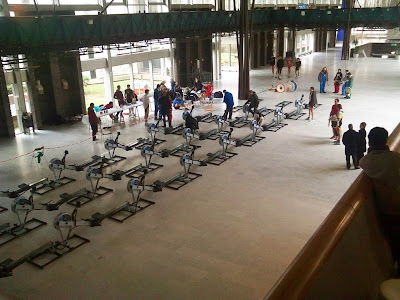 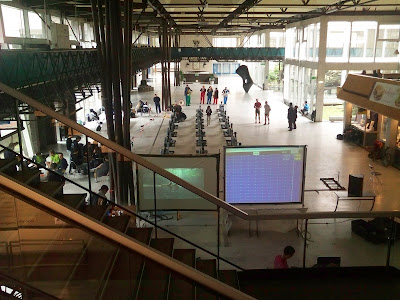