(Note: this post is one day late! I'm already at Ecole Polytechnique, but I'll get to that when I have time to write, just pretend it's Jan 2)


After all the things that happened yesterday, today couldn’t be crazier right? Wrong!

The market: a lesson in the gazillion types of French cheeses

After breakfast, Marie, the mother of my host family, took me to the local outdoor market. There was an outdoor stall for cheese (une fromagerie), and stalls for veggies, meat, and the rest.

General De Gaulle once said, "How can anyone govern a nation that has two hundred and forty-six different kinds of cheese?"


So, here is a sampling of just some of the types of cheeses we had for dinner (Greg Brown, you’ll love this!) 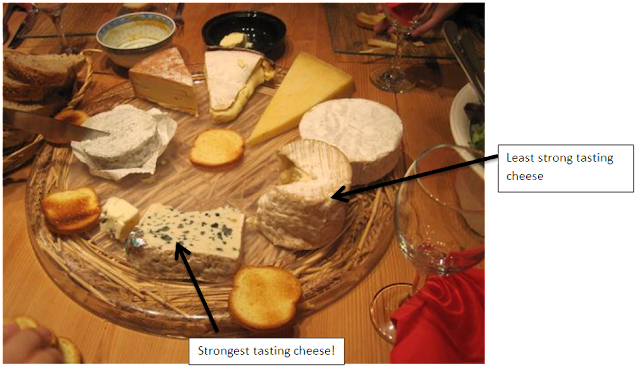 In fact, the cheeses are arranged clockwise, from least to most strongly taste. The strongest tasting cheese, is the Roquefort cheese. It was boycotted by the Americans after the French opposed the invasion of Iraq (see article here).

For lunch, we had a traditional French dish: crêpes! I love how the crêpes were cooked fresh at the table, with the ingredients added right in front of your face:
Finally, the dessert after the cheese course for dinner was … (forgot name). The epiphany holiday is a cultural celebration.
How it works:
And of course, as fate would have it, yours truly won:

Spiral learning for French: how I ended up reading the liturgy at Catholic mass
Those of you readers who go to Olin will understand what I mean by spiral learning. For all the others, this story is self-explanatory.


My host family is Catholic, so they attend mass on Sundays. I’d been to Catholic mass before, but not one in French! The mother and 4 daughters also help run the musical parts of the service. So, they conscripted me in helping them by playing violin for the service.


OK, that’s easy. Music is the universal language right? But 30 minutes before the service, Marie (the mother), asked me to read one of the two liturgical passages. She thought it would be appropriate (for the curious, the passage is here).


Now, I was nervous. J’ai un gros accent français! Christelle, one of the daughters, helped me practice reading the passage. I wrote all over the page with phonetic spellings (for example, Jésus is pronounced “Zhayzoo”).


That didn’t matter I don’t think, because I’m fairly sure I messed most of the words anyways.


Afterwards, someone came up and told me that it was good that I read the passage: "people had to really pay attention to understand what was being said!"

Lesson for the day

If you’re traveling somewhere for an extended time (that’s you, college juniors studying abroad!)…. Spend time with a local family! It’s much cooler (and potentially embarrassing) than doing the tourist thing.
Posted by Steven Z at 1:44 AM