The world is flat (and very multilingual)

The past 3 days, I’ve been hanging around Paris, doing the whole tourist thing (Louvre, Notre Dame,…) with some of my friends in PEI (Programme Echange International). I’m not going to talk about it, because its nothing new. I’ll talk about how international my experience in France has been.

Before that however: here are some pictures. 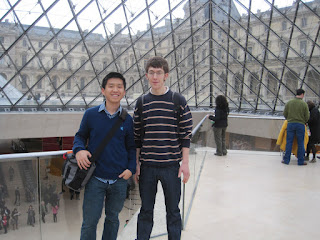 For more pictures, check out my Picasa album here
X has several “types of students”:
·        Students in the “ Cycle Ingenerie”. This is the equivalent to US undergrad. People in this program have to do a one year of military/service, and are the ones who get to march down the Champs Elysée on Bastille Day. Of these students (500 in each class)
o   400 are native French
o   100 are international students
o   ~30 students are in PEI. This is the program I’m in
·        Master’s students. These are students who are only here for 1/2 year, depending on what education system they come from. For example, here in France, people finish their first year of masters (M1) concurrently with their undergrad, so they would only come to X for M2.
o   Lots of international students here
·        Doctoral students.
o   I haven’t interacted too much with these students!
·        Students here for doing a research internship.
Most of the people who live on campus are the students in the first group. Most of the native French students leave campus on the weekends to be with family in/around Paris. This weekend though, 500 of them rented a train to go ski in the alps. Yes, a train! With a disco wagon (according to my sources). So, I’ve spent a lot of time with the only other students on campus: people in PEI. 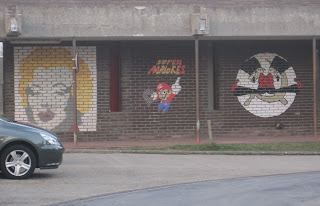 The 3 pictures above are examples of Kes art. The Kes is the student government organization. Each time a team runs for office, they have to paint a mural on a building. See more Kes Art here.

Everyone speaks 3 languages, or more.

“All my American friends speak Chinese”

A couple of us stopped by the Hôtel de Ville (city hall) in Paris to watch some of the other PEI students ice skating. I ended up meeting a guy named Ilya (for those of you francophones, note the irony). I was about to say, “Ah, so you’re the other American I’ve been hearing about!”, when he came up to me and started saying: “你好吗？我叫 Ilya”. We then proceeded to have the whole conversation in Chinese. Ilya is actually Russian, but speaks Chinese + French. He’s the only American I’ve met so far who goes to X in some form or fashion (for those who are curious, he’s a New Yorker, from Columbia).
My friend Alexandre (the guy who cooked the sardines), joked with me: “All the Americans I know speak Chinese to each other, not English”. Apparently the semester before, there was another Chinese-American, who only spoke Chinese with Ilya.

On Saturday night, I walk into the kitchen to cook, to find everyone speaking English (all the PEIs usually speak French, unless they’re trying to explain something complicated to me J). I asked why. They told me there was a non-French speaker in our presence. So that’s how I end up meeting Laura, American #2 for me, who was visiting her boyfriend, Théo, who studies here at X.
Me: How did you two meet?
Théo: I was doing a research internship at MIT, in Boston
Laura: And I lived in the same house in Boston.
….
Me: Ah! I come from Boston too!
Laura + Theo: Actually, we saw your sweatshirt. We know a student from Olin, but you probably don’t know him
Me: I bet I do.
Laura+ Theo: Matt Ritter lived in the same house as us named Pika
Me: of course I know Matt Ritter! I had dinner in Pika a month ago!
…

A request: do you want to host a French high schooler for a month in the summer?

The French family (the Golhen's) has a daughter, Florence,  in high school, who wants to discover American culture and improve English (though it's already very good) for a month summer. They asked me to post this advertisement on my blog. If you're interested in hosting Florence, see this document.
P.S. Florence really wanted to go to the East Coast, but I told her the Midwest is just as good. That's a challenge :)
Posted by Steven Z at 12:12 PM