Happy new year from France! I had quite the experience in the last 48 hours. I got to Paris, stayed with a family friend, went to a new year's party, and had a tour of a picturesque town in France

My flight
Was delayed quite a bit, everything turned out fine. I have trouble sleeping on planes, so I ended up staying awake for 36 hours (with a little nap in between) straight! More on that later.

There was some interesting scenery along the way, including this picture of lots of hills (with no sign of civilization in sight!). 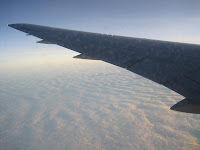 Somewhere in Scotland near here
New year's in France...
Since Polytechnique doesn't start until 3 Jan, I'm staying with a French family for three days. They generously picked me up from the airport, and let me stay at their house in Le Pecq for this time.

How I met this French family is an interesting story: they're long-time friends with a family from my church (in Boston). Summer of 2009, when I was working at Olin, the French family came to Boston to visit, and stayed at the house of the family from my church. I ended up giving a bike tour of Wellesley (if you're an Oliner reading this, yes there are interesting things in Wellesley!), they kept inviting me back for dinner, and voila, we became good friends!

Warning to other travellers: if you want to adjust well to jet lag, don't travel to another country on New Year's eve (or you'll be up partying all night!)

But for me this plan ended up well. I arrived in Paris at 13h00, 31 Dec. My host family hosted a party that started at 20h00. The party was mostly for the friends of their 4 teenage daughters. So, I ended up meeting  around 40 young adults, ranging from high schoolers, to students in prepa (more on that in the next section). 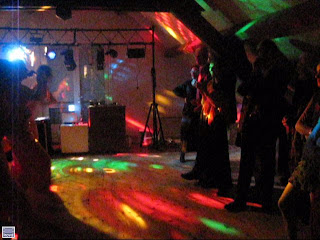 Dancing at the party!
The conversation when I met someone went something like this:
Me: Bonjour, je m'appelle Steven.
Other person: Enchanté, je m'appelle ....
....
Other person: Oh, tu es américaine! Quand es-tu arrivée en France?
Me: Aujourd'hui! (Today!)
Halfway thru the party, my response to the latter question became: "Hier! (Yesterday!)"".

I also danced (or tried to learn from girls teaching me). Apparently dancing rock is a very popular thing in France. Now this isn't mindless moving to pop/rock music (think of your high school dances). This is a pair form of dancing not unlike Lindy Hop.

The party lasted until 2h00 in the morning the next day (the French adults were super energetic, and talked until 2am with lively conversation!). As you can imagined, I slept a lot after that party!

Some thoughts on French education

In French education system is organized like so (my crude, approximate summary)


After lycée, take the bac test, and have a choice of université, similar to the U.S. system, or go on to the prestigious grandes écoles (of which Ecole Polytechnique is the most famous school for engineering). To do the latter option, French students have spend 2 years in école prépa, studying heavily theoretical foundations, and take the concours (test) for entrance into the grandes écoles. Prepa  is very brutal academically, as the French take the prestige of a school matters a lot more than in the U.S.

As I mentioned, most of the students I met were in prépa. When I told them I was an exchange student for Ecole Polytechnique, their response was always along the lines of "Oh! That's great!". It also probably played in a role why everyone was so patient with my horrible French!

Let me be clear though on two points


Other interesting people I met

A thought on my French

You might be asking So Steven, how's the language? Overwhelmed yet?

But it's not as bad as I thought. It's hard for me to listen/talk in group situations (understanding 40-60% of the conversation). But talking one on one with people actually works. Part of it is because all the French people I've met so far are super nice and are very patient with me (so much for the stereotypes!)


But there is a limit to how much French you can learn in one day! Towards the end of the party, I just couldn't take any more French!


More on Le Pecq and my host family


One last thing. The town I'm staying is very picturesque. Here's a picture of the town, that I took during a bike tour of the town. 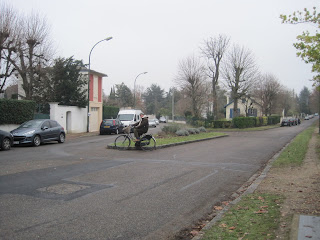 The man on the bike is Jean-François, the father of my host family. He's also a Polytechnique alumnus. (X80-something)
That's it for today!
Posted by Steven Z at 7:15 PM