Volunteering for a conference of 1000 students

TThis is my first post in over a week! What’s happened since then?
·        I passed the 1 month mark at Polytechnique
·        It’s the new Lunar New Year. Rabbit for the Chinese, and as I learned, Cat for the Vietnamese. 新年快乐。
·        I volunteered for the Rencontre Nationale des Chrétien en Grande Ecole (see below)
First some random observations to get you warmed up.

… is lots of improvisation. For instance, we had a tray that couldn’t fit completely in the oven, so we did this instead: 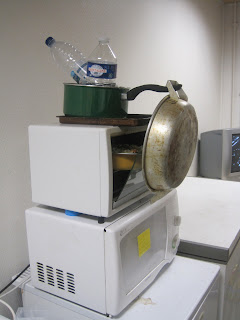 On the other hand, sketchy Chinese* restaurant exist in France as well: 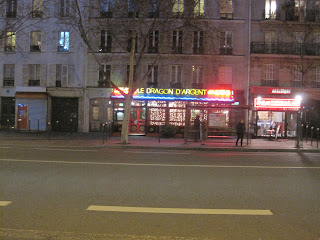 The Money dragon
*I use this term endearingly. Sorry if you own a Chinese restaurant J

I had to obtain my residence permit this week. To do so, I had to buy a special 55 euro stamp. The staff at my school gave me a guidesheet, which told me to go to the Financial Affairs office of Palaiseau north-east. I arrived at an abandoned building: turns out they moved last November! So as fast as I could, I asked around for directions to find the location of the new office. I arrived at 4:35pm, 5 minutes too late (remember, it’s a 35-hour work week). Some people were in the building, but they couldn’t (or didn’t want to) let me in. How does one deal with frustration like this?
·        Option 1: cry. Most of us don’t do this anymore, since our maturity level is >6 years old (I hope)
·        Option 2: complain about the French culture of administration. I think most people of Anglo-Saxon background (not necessarily of descent) would do this
·        Option 3: take a walk around the town.
Luckily, I took the 3rd option. After almost doing the 2nd .

Hello Oliners! Did you know that Polytechnique has a honor code too? Except it’s 20 times older than ours.


The most amusing item needs a little background. In French, one uses tu or vous, for the word “you”. Vous is more formal and is used for strangers and older people.
According to a Polytechnicien friend, the Polytechnique honor code says that all Polytechniciens, no matter how old, must use tu with each other. So if I met former French president Valéry Giscard d'Estaing, I theoretically say, “Salut, est-ce que tu aimes President Sarkozy?”

I participated this weekend in the RNCGE. Chrétiens en Grande Ecole means Christians in Grande Ecole (if you don’t know what Grande Ecole is, see this post). This is a network of the Christian Organizations (again, mostly Catholic) of grande écoles all over France. Recontre Nationale means national meeting.
This year, Polytechnique had the pleasure of co-hosting the conference with two other schools nearby. I signed up to volunteer 2 weeks ago to help with the conference because I thought it would be a good experience to meet people: and it was!
There were over 1000 students at the conference:
I mainly did food preparation related things, as well as directing people (good way to practice saying 1 sentence really well).

I helped organize a conference last spring at Olin, and I thought there were a lot of logistical tasks to do. But nothing in comparison to this. I won’t go into too much detail, but I was really impressed by the way my fellow French student organizers cranked out the logistics of this conference. Every volunteer was assigned tasks and knew exactly what they were doing when (in practice, it was less ideal than this).
For example, I worked a while on food 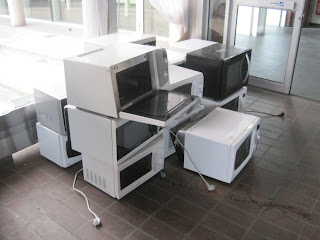 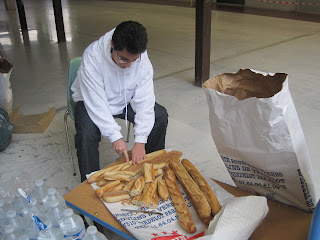 There were about 20 sacks of bread like this!
Volunteers worked efficiently on each task
I also did some crowd control with this guy:
I met Sebastien, who’s a Jesuit seminarian, and we talked about basketball, among other things (when I said I was from Michigan, he said: “Michigan State! Home of Magic Johson!”; I then informed him I lived also in Chicago + Boston).
We were in charge of giving this crowd of people directions once they arrived at the food line: 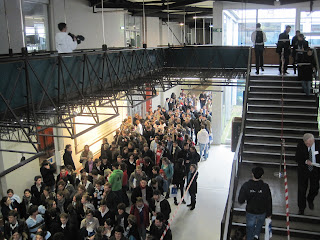 I had some interesting experiences/talks with people. I talked to…
·        Several priests and  nuns from all over France
·        One of the speakers, a university student who biked around the world for a year to see Christian communities around the world. From him, I gained further evidence that everyone in the world <40 years old speaks English J
·        Many different young people from all over France
If you want to know what we talked about, ask me personally via email!

Some observations of French culture:

Of course, this is just my experience with my segment of people…

… is very popular. For example, all the volunteers did this dance to start off the conference (sorry… I’m not in the video because someone had to record!)

The role of English

Instead of saying “ like, um, you know”, I’ve heard many students say “bof… voila… uh…”. A lot of French words end with an “uh” sound.

I had a lot of trouble communicating this weekend. This was because everyone was speaking so fast and saying short phrases. Of course, I just nod my head because I don’t want to waste other people’s time. But I think this is bad in the long term because then everyone assumes my level of French is better than it actually is.
New resolution: I’m telling explicitly to all my native French friends (the international students talk much slower) to speaker slower.

·       I challenged Jason+Rose+Lexi, who are studying away @ Singapore to a competition: to see who can find the strangest/most interesting thing.
So here’s what I’ll do. At the end of every post, I’ll post a picture of something interesting from France, as well as Jason/Rose/Lexi’s latest strange thing. I’ll ask them to do the same thing OK:

(posted from this post: http://olinsingapore.blogspot.com/2011/01/food-train-system-and-more-food.html)
Posted by Steven Z at 11:29 PM