Today marks the 1-week mark for me in France! I finally have the time to write again. It’s only been 3 days since my last post, but it’s felt like forever, simply because so much has happened in the past week! To give you an idea, my 190-page journal is now at page 31 after 1 week. I’ll be needing a lot more of these journals!
Here’s what I’ve been up to the past week:

Marie drove me from Le Pecq to Polytechnique. We passed thru Versailles, and arrived at Polytechnique.
Did you know there the entrance to Polytechnique is lots of farm-land? I didn’t either. But it’s still more convenient to get into the city than at Olin J.

I registered with the exchange office, where the ever-helpful Mme. Vigouroux (director of the exchange program) gave me a crash course/tour on Polytechnique. 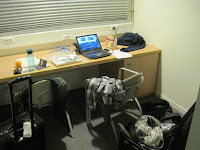 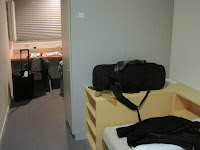 Pictures of my room
I went to my first course, a section of semiconductor physics. How much did I understand in this course? Rien. After dinner, I went to orchestra rehearsal, and met some really nice French students there.

Highlights include: I found the “international table” (a lot of international master’s students sit there) in the cafeteria. These master’s students come from all over the world. I’ve met 2 Lebanese, handful German, 1 South African, several Italians, an Argentinian, many Chinese, 1 Portuguese ... and no Americans.
I also had my second ever class here, the first lecture of a course named “Creation of technology start-ups”. It is taught by Stephane Mallat. He's a professor (used to teach at NYU) who recently sold a startup company  he started. The company used bandlets compression technology to turn SDTV into HDTV.
About the course: I’m working in a group of 3 or 4 students to take a piece of technology from Polytechnique’s labs, examine a potential market opportunity, and writing a business plan. For those of you who’ve taken EPS3501, this is a much more technology-push orientation of entrepreneurship.
I talked with Prof. Mallat and the other co-instructor afterwards (in English, for now). The conversation went something like this:


How much of this lecture (by the way, a solid 4 hours of talking) did I understand this time? Beaucoup!

Had lunch with people CCX (la Communauté chrétienne de l'X), the (mostly) Catholic student organization on campus. Again, the students were super-helpful in answering my ever-growing list of questions.
Had my Networking and Protocols course. I walk into the room, and see two guys chatting in English. Turns out those are the professors. One of the co-instructors is an American guy who works at Cisco. He’s pretty funny. (Me: Alors, vous parlez bien français?. Mark: Non, je parle comme un enfant, mais my wife is French, so…).
The lecture was très interessant. We learned about the 4 major perspectives ofnetworking:

Oh I understood le plupart of the lecture this time. But part of it had to do with the slides being in English.

I had lunch at the international table, and ended up meeting the “we like to make non-politically correct jokes”-master’s students (Me: How can you tell I’m American? Them: Because you’re concerned about being non-PC… and you’re using your Nalgene at lunch). For those who were curious, there was 1 French guy, 1 Indian dude (who only wanted to speak English), 1 Brazilian, and 2 Mexican students.
I had my first meeting for the Creation of Startups class. Apparently my teammates really liked my meeting management style: create an agenda, crank thru agenda, create action items. Yay Olin projects!
I asked my friend Youssef (He’s a Lebanese student I met on the first day of class) about food shopping, and he generously offered to take me shopping in Paris. Going into the city for the first time was quite the experience (sorry, no pictures), so here are simply some thoughts I had

In the afternoon, I went to meet up with Christopher Vincent, a fellow intern from the summer who just graduated from Missouri S&T, and who’s traveling Europe for 3 weeks. I was going to meet at the Louvre. Unfortunately, cellphone troubles meant that he never received any of my calls! So I ended up waiting outside the Louvre for 2 hours, people watching and marveling at all the grand buildings. Just as good!
I went back, and a fellow exchange student cooked us some dinner.

That’s all for what I did. I won’t bore you with this every week. I just wanted to give a sense of a (a)typical week is like. Here are my observations/thoughts/insights on certain topics, in no particular order (I’ll save some for the next blog post).

France reminds me a lot of China. Probably just because it’s not the United States. What I mean by that: so much of the U.S. is new, and a lot of the architecture, design, decoration, roads, signage seem neatly packaged. Whereas in France+ China, the mix of old and new, without as much regard for being neatly packaged really makes for an interesting experience

Most of the students and faculty at X speak English, at least better than my French. It’s very interesting to listen to lectures where: 1. The slides are written in English, but the professor is speaking French, and 2. English is used almost as an additional vocabulary. Example: “Maitenant, nous allons parler un peu sur le subjet de Making a business plan”

My French in France

Is getting exponentially much better (as calculated % understood of each successive lecture). Talking is slowly getting better. So far, I’m only comfortable with 1. Listening to lectures, and 2. Holding one on one conversations. Otherwise, the French students talk to fast in groups for me to understand them.

How I end up speaking 3 languages in one day

There are lot of Chinese students here. And some Chinese-French. The other day, I was ordering a sandwich, and I ended up starting in French, speaking Chinese because the server couldn’t understand my French.
Also, I've been hanging a lot with the other international exchange students. They come from all over, speak better French than me, and cook very good sardines and soup:

Everyone is a math major!

Not everyone. But many of the students I meet are applied math majors. And most of those students want to do finance. All roads lead to finance!

Every time I’ve gone to class, lunch, or event, I end up sitting down with people I’ve never met before. And there’s always a nice student, sitting next to me, who I end up talking to, and who ends up me being my French-English dictionary for the hour J.

The classrooms are always cold. At least much colder than in the U.S. And the lights are always off in the hallways of even public buildings. You have to turn them on manually. It does seem like the conserve more than us.

More on this in another post, but essentially, most of the classes here are lectures. And no problem sets. Just one big test at the end. I think there are an equal number of amphis (lecture halls) vs classrooms. I can’t say which is better for my learning yet (and certainly not for other French student’s learning). It’s just different.

Do a lot of things. Talk to people. Profitez!
Posted by Steven Z at 9:04 AM