I’m going to try to post more often now, so here’s a relatively short post for you.

My romance with France is over*

After the conference last week, I’m beginning to suffer from “study away novelty wearoff”. A friend who was studying at Babson from Austria told me about it a month into his study away experience. He was beginning to miss his home, and even though he really liked Babson, the novelty was beginning to wear off.
That’s probably where I’m was at earlier this week. No longer is it exciting just to talk and meet new people. All the sites in Paris just seem like another tourist destination. People are friendly but of course aren’t as close as friends at home.
However, a good dose of sickness and physics got me over that slump this weekend. I studied semiconductor physics for 4 days straight (while resting from being sick). Now ready to visit England the next week and a half for winter vacation and finish (already!) off my last month at Polytechnique
*My choice of wording was solely based on the rhyme

Read on about Stone soup!


Something you’d never see in the U.S.

Brazil played France in a friendly last week. France won 1-0. But before that, I spotted this in a classroom

Students from Polytechnique put on an annual piano competition, for Parisien university students who are not majoring in music. The final round features the 3 finalists performing their concerto accompanied by the Orchestra of the Republican Guard.
This year was all Beethoven. Concerto No. 3, 2, 3. Yes, 2 of the same piece! And apparently No. 5 was out of bounds for musical reasons (sort of like how amateurs are never allowed to play the Beethoven Violin concerto).
There was also a contemporary music concert (not too much my taste, I have to say).

Alex the Portuguese friend tells me stone soup is a Portuguese folk tale.
We didn’t make that exactly, but we did do something like that in the process.

Açorda is the name of the game. Also, random sidenote, Alex has a poem in Portuguese he would like to share:


Maria Cristina,
Correia de Matos,
de Medeiros Cordeiro,
de Calheiros Veloso.
Actually, that's his mom's name. We were talking about longest names (certainly not Chinese names...) during dinner, and this came up. It sounds longer than it reads (~10s).

Back to the recipe: 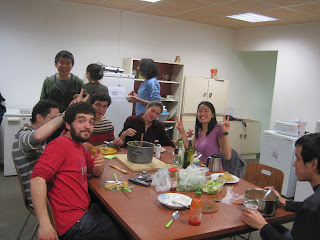 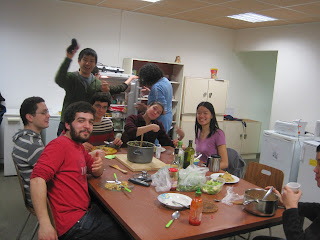 Some of you might ask: “Steven, half the things you blog about are food related. Is this really all you do?”
Answer: of course, this is France!
Posted by Steven Z at 12:16 PM