Guest post from Rebecca, who's seen more of Paris than me

Salut everyone. I'm writing this from London, where my friend Rebecca Leung (Olin '12) and I are visiting.

Rebecca came to visit me in Paris last Thursday. We left for London this Thursday. She'll be leaving from London to Israel, where she is studying away, Monday. I will then continue exploring England by visiting Nottingham, Bath, and Oxford.

You might ask "how do  you have time to travel so much?". Answer: "It's spring break already for me!*"


*technically it's the "vacances d'hiver"

Read on to find out about ice skating on the Eiffel Tower (no joke!)


Steven: "You've seen more of Paris than I have"


So before I head to the desert in southern Israel, I'm visiting Steven (Olin) and Grace (Wheaton) in Paris. And I think Steven's right - I've seen so much of Paris in the last week it's ridiculous.
I won't bore you with minute details about the Louvre, Notre Dame, Arc de Triomphe, Sacre Coeur, and Versailles (pictures here and here). But I will mention my trip to the Eiffel Tower as a candidate for Steven's strangest/most interesting thing competition. Now, the tower itself is well-known and an awesome feat of engineering, but can hardly be called strange. Put an ice skating rink in the first level up, though, and now we have a contender! I almost didn't believe it when I read about it online, but it's true - there's a small rink with real ice and great views. 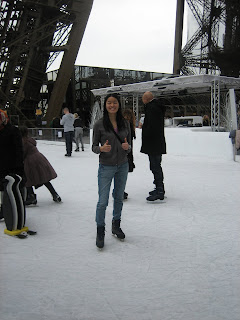 The other especially noteworthy experience I've had - being the target of pickpockets. My first time as a target was relatively tame - an acquaintance walking next to me noticed the potential thief before she could even touch my bag. But my second time was quite an encounter.
I stepped on to the train as usual with Grace but as soon as I was in, someone pushed me forward roughly. I was surprised because the train was not crowded at all. I thought, "There's room for everybody, don't push me!" Then things took a turn for the worse. I got shoved to the side even more aggressively than before. I was able to hold on to the center pole, otherwise I would have fallen. That's when I noticed that my bag was open and the lady next to me had a coat over her arm. I quickly checked my bag, noticed that my wallet was missing, and swiftly slapped the lady's arm. Out came my wallet from under her coat! She had even managed to unzipper my wallet and a couple coins fell out. Good thing I was wearing my money belt. I reached down to pick everything up and the lady had the nerve to try to "help" me pick up the coins. I didn't give her that chance and as soon as I had my things, I fast walked to a seat farther away. I glared at her until the train got to the next stop, where she left with her daughter.
Later, Grace told me that this mother-daughter team had also tried to get into her bag, but were unsuccessful. This all happened in the span of 20 seconds and at first I just felt overwhelmed, but then I got angry. Who would teach/recruit their daughter to do such things? Who would stoop to such low behavior? Did they really think I wouldn't notice during the time the train took to get to the next stop? I miss the Honor Code.
I guess I don't blend in well enough - I'd say I look like an American engineering student and my clothes pale in comparison to standard Paris fashion. Paris: you are an amazing city with jaw dropping sights but I will be glad to double-cheek-kiss your theives goodbye. Au revoir!
Posted by Steven Z at 10:58 AM