Another guest blog post, this time from Xavier Ziemba. Xy and Jeff Atkinson (both Olin ‘12) came to visit me last weekend, just after my last exam. Xy is studying in Belgium, and Jeff in Italy. 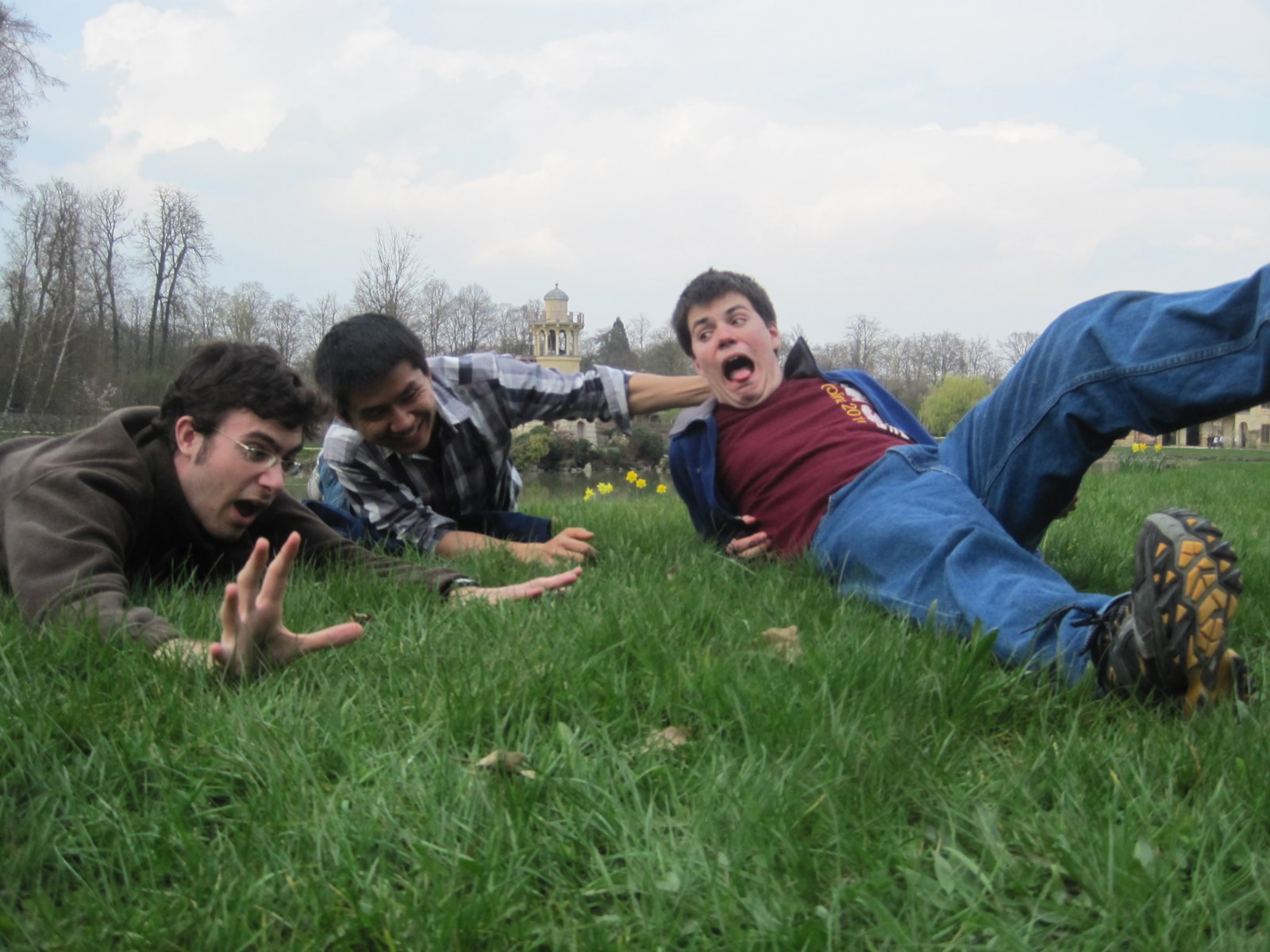 Being little kids in the village in Versailles

Last weekend Jeffrey Atkinson (’12) and I went to visit Steven in Paris. Jeffrey flew from Torino, Italy on Thursday and I originally was due to arrive from Leuven, Belgium on Friday. However, after a rather productive Thursday morning, I decided to skip class on Friday and leave a day early.

Taking Thalys, the high speed rail line serving Paris-Brussels-Amsterdam, has to be one of the most pleasant transportation experiences I’ve ever had. To leave a day early, I simply had to call a hotline and ask if space was available  – no fees, no hassle, pure easy. It’s just like an Amtrak train, but faster, more comfortable, and with good taste for interior design. 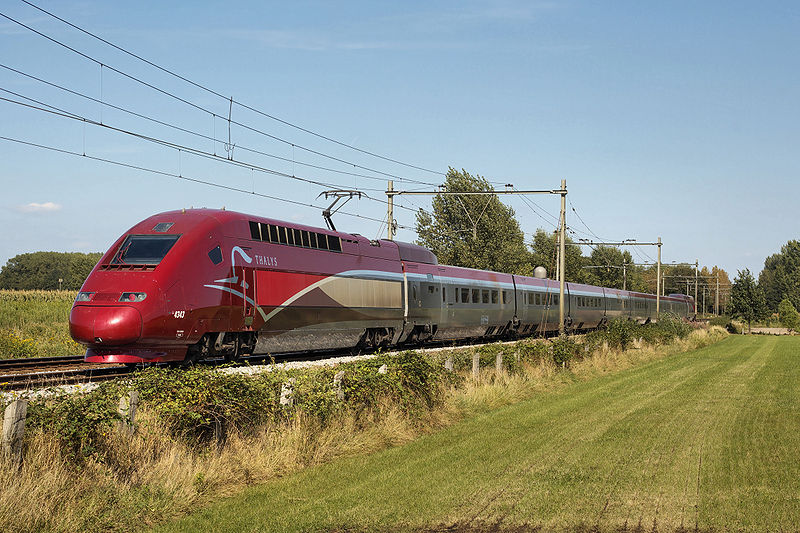 Actually, there is one difference. The high speeds of the trains leads to more vibrations and bigger bumps. On a typical US Amtrak train, the ride is completely smooth. On Thalys, it is wise to hold on to something while moving about the compartment. Think of the ride as similar to a large charter bus.

Thalys was easy, but the Paris transit system was not. After meeting Jeffrey in Paris North station, we headed to Musée d'Orsay. Normally this trip should have taken us only 20 minutes, but it took nearly an hour after heading the wrong direction on a train.
We consistently had a number of other mishaps with trains. Many of these had to do with simply misreading signs and missing trains. However, even more annoying was the magnetic sensitivity of the tickets. Paris train tickets all use very thin magnetic stripes. Unfortunately, these seem to quite easily get demagnetized. Our first experience with this problem was when going to Versailles. All three of us were unable to use our tickets to exit the transit system. We talked to the gate attendant and he simply let us out.
Returning to the system we had the exact same problem (no surprise there). Unfortunately, we were with the crowds leaving Versailles and many of the tourists were milling around the information booths. After pleading with various station attendants to just let us through the gate at each station on our route, we finally found one who could replace our tickets.

In all, I got to visit the Eiffel tower, the Catacombs, Musée d'Orsay, the Louvre, the Palace of Versailles, the Cathedral of Notre Dame, and Napoleon’s tomb. Of these, only the first two charged me admission. The others normally charge unless you’re both under 26 and a resident of the EU. Studying in the EU is considered “residency” by all the museums. All I needed was my passport and Belgian visa. I’d have to vote Orsay as the best museum though. I’m fond of both impressionism and post-impressionism and these two genres of art are Orsay’s specialty. Additionally, I finally got to see Whistler’s Mother at Musée d'Orsay.


How do you eat that? 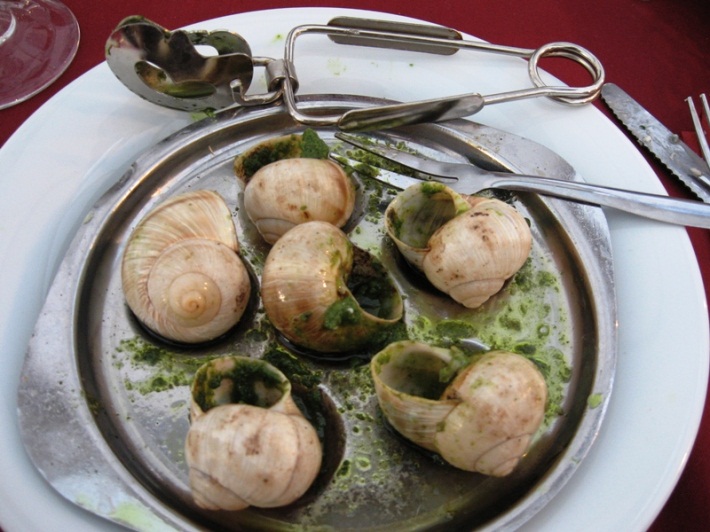 Saturday evening we wandered into a random restaurant for dinner. By this time in the trip I had realized that it was best to not translate each dish and just order something. I’d have Jeff and Steven help identify the major meat in each dish and pick what kind of meat sounded good.
At this particular restaurant, we noticed that they served escargot. We all wanted to try the dish, so we ordered an appetizer of six snails. When it arrived we got six escargot, a funny looking clamp thing, and a two prong fork. Jeff, Steven, and I sat there looking dumbly at the escargot for a few seconds and then realized that no one had the slightest clue how to eat them.
Steven called the waitress back and asked her to explain. After a bunch of French words that I certainly didn’t understand, we deciphered her motions. The “clamp thing” is used to hold the snail shell while you scoop the inside out. Once we managed this task we discovered that snail is really tasty!

My time in Belgium has given me a sensitive ear for the familiar sound of a Yankee accent. In most tourist attractions you could hear plenty of American English spoken by the tourists. After Jeff had left to catch his flight, Steven and I went to grab lunch at a local cafe. We thought we were in a less touristy location, but were proven wrong by a friendly US Army colonel who was sitting next to us. I quickly struck up a conversation with the fellow throughout the meal. It was all small talk, but filled the void. After we had finished and left, Steven remarked that the conversation seemed somewhat pointless to him. The colonel had very little in common with us besides being American too. Steven was right that the conversation probably had little actual value. So why should we talk to him?
Steven and I bantered for a while about this issue and I’ve come to my own conclusion about Americans and talking. Americans, and probably most people from English-speaking cultures, really hate silence. I think it’s more comfortable for the average American to chatter constantly instead of allowing silence to permeate the conversation. For whatever reason, we view silence as bad and seek to get rid of it with small talk. In other cultures, particularly some Eastern cultures, silence is not viewed in this manner.

Alas though, I had an excellent time in Paris, ate great food, and got to hang out with two great friends. Paris is now definitively on my list of places to visit again. Three and one-half days wasn’t nearly enough time.
Posted by Steven Z at 2:45 AM